Osage orange firewood, also known as hedge, horse apple or bodark, is one of the best firewood types available.

This oddly shaped tree does not grow very tall (roughly 26-49 feet) but its wood is extremely dense making it a great firewood choice.

However, just because it produces a lot of BTUs doesn't necessarily mean the wood is cherished by everyone.

In fact, many people think of hedge trees as nothing more than a nuisance. 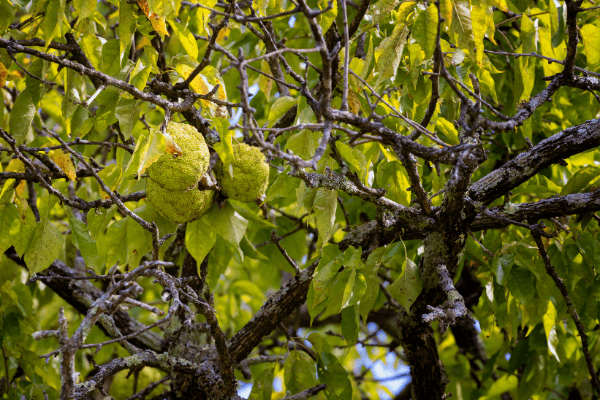 Their oddly shaped branches contain sharp, spiny thorns that are hard on both humans and equipment.

Plus, once you cut down a hedge tree the stump quickly reproduces multiple thorny stems that grow vigorously to replace the existing tree.

What Is Osage Orange?

Osage orange, or Maclura pomifera, is a small deciduous tree or large shrub.

It normally grows to less than 50 feet tall and produces distinctive fruits that are bumpy and a bright-yellow color.

These fruits release a sticky white latex fluid when they are damaged.

Despite the confusing moniker, these trees are not actually related to the orange trees that we commonly grow to harvest their citrus fruits.

The fruits aren’t really that tasty at all, generally ignored by humans as well as by foraging animals.

With round-topped canopies and short trunks, these trees are known for their dark, deeply-furrowed bark and thick, fleshy roots. 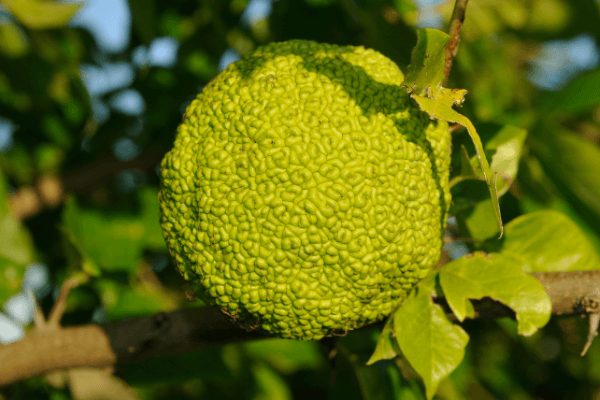 They have a somewhat squatty appearance and the wood is known for being hard, strong, and flexible.

Osage orange trees can be found primarily in North America in only a handful of states as well as in countries like Italy, India, and the former USSR.

It requires deep and fertile soil in order to grow.

What's The Wood Used For?

Historically found in the Red River Valley of Oklahoma, Arkansas and Texas, the trees were planted by the millions for use as a natural wind barrier.

These "hedgerows" were created to reduce soil erosion.

When severely pruned, the tree produces thorns that form a solid barrier.

Native Americans cherished the wood for bow-making due to its strong yet pliable branches.

The tree is commonly called "bodark" which is derived from a French word meaning "bow wood."

Now, besides firewood the tree is commonly used for fence posts because it can be buried in the ground for decades without rotting or being attacked by insects.

The dense wood is also hard on chainsaw chains.

If you're going to go out and cut osage orange for a day, do yourself a favor and bring along 2 or 3 extra sharp chains.

It will save you the aggravation of hand filing 1 chain all day trying to keep it sharp.

You should also split the wood while it's green.

It splits okay when it's still wet but if you let it dry out and then try to split it, forget it.

It's difficult to say the least! 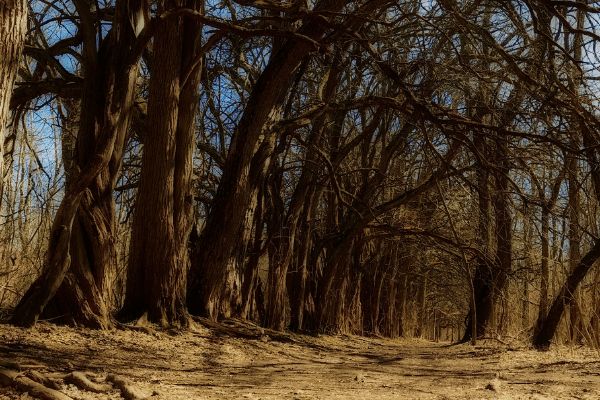 That’s primarily because osage orange is so hard and dense.

Although many people say you can burn the wood when it's green, let the split firewood season for about 6-12 months for best results.

Osage orange isn’t the “wettest” wood by far, but we would never recommend burning green firewood.

It will not only reduce the overall heat output of the fire and be more difficult to get the fire started, but it can also increase creosote build-up.

Recently, a visitor to our website shared his opinion of osage orange:

"As far as heat output, in my opinion osage orange can not be beat.  You definitely want to cut it and split it while it's still green and then let it season for at least 2 full years.

After that, you definitely have wood that will chase away the coldest winter weather."

However, the wood actually burns so hot you can easily damage a wood stove if you're not careful.

In fact, osage orange is reputed as the hottest-burning firewood, offering the highest heating value of any commonly available North American wood.

You’ll see here that it has an available BTU value that is higher even than other popular firewood species like oak and maple.

It burns long and hot and is also rot-resistant, making it a good choice for long term storage.

The wood also releases various compounds that can repel insects so you might not have to worry quite as much about insect invaders damaging your firewood stash.

Users have reported that it sometimes burns hot enough to damage or warp wood-burning stoves if you don’t take extra precautions and steps to keep the temperature down.

The easiest way to safely burn osage orange firewood is to mix things up a bit.

Instead of burning strictly hedge, mix it with other popular hardwoods like ash, beech or maple firewood.

This will allow you to capture all the great heating qualities of the wood without the fire becoming too intense.

The wood throws a shower of sparks described by many people as a fireworks show.

Even when you have seasoned and dried your osage orange firewood, you’ll still notice that it releases a ton of sap. 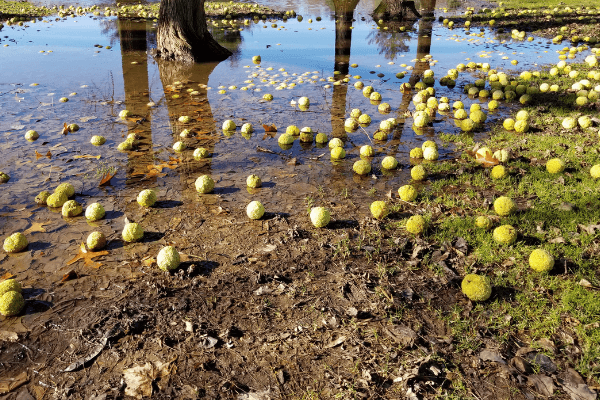 This sap is similar to the substance released by the fruits of the tree - it is thick, sticky, white, and latex-containing.

As a result, when you burn your osage orange firewood, the latex is going to light right up and produce sparks.

This constant shower of hot sparks makes burning the wood in an open fireplace somewhat dangerous.

This is a firewood type that’s best burned outdoors when possible.

Producing 32.9 million BTU's of heat per cord, Osage orange is a remarkable firewood.

Although it may be a little more difficult to harvest compared to other types of firewood, the quality firewood you get in the end is definitely worth the extra trouble.