How To Replace A Chainsaw Clutch And Sprocket

Learning how to replace a chainsaw clutch and sprocket is a relatively quick and easy job that anyone can do.

Although they make specialized tools for the project, you can easily repair your broken clutch or sprocket by just using a couple of common, everyday tools found in most homes.

The centrifugal clutch on a chainsaw is basically a switch that allows your chainsaw to run at an idle speed without the chain spinning.

Then, when you give the engine gas, it engages the clutch which spins the chain to cut the firewood. 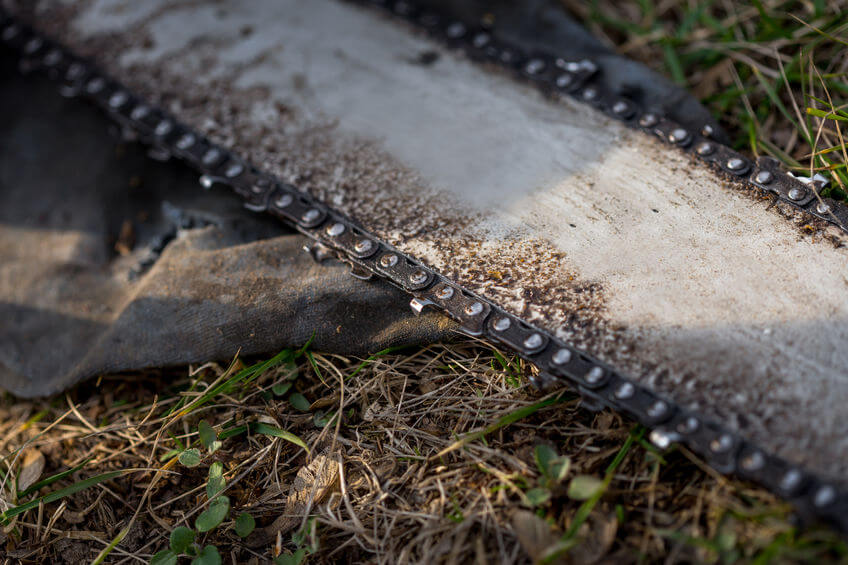 It's actually a pretty simple part that plays a big role in how your chainsaw functions.

The inner part of the clutch is connected to the engines drive shaft that spins constantly as your engine runs.

As you give the engine gas, 2 mechanical arms are pushed out by centrifugal force which engages the outer rim of the clutch.

Once the clutch is engaged, it turns the sprocket which then turns the chain.

This spring when I started up my chainsaw for the first time it didn't want to idle.

I could keep the saw running if I feathered the gas, but once I would let off, the saw would stall.

Since it was the first time I used the saw after letting it sit in my garage all winter, I assumed it was just bad gas so I decided to continue to run the saw and see if the problem would get better.

Then, while felling a tree the saw started making a loud clanking sound with metallic parts rubbing against each other.

The saw then quickly started to smoke, then stalled and seized up.

The chainsaw I was using was a Husqvarna 345 that has run flawlessly for the last 15 years.

I've cut a lot of wood with this saw and I'm very conscious of how I mix my gasoline so I wasn't sold that the engine itself seized up, so my attention was drawn to the clutch.

When I took the clutch cover off I found that one of the mechanical arms that are pushed out by centrifugal force had broken in half and bound itself inside the clutch cover.

This caused the clutch and sprocket to bind up, not allowing the engine to turn over.

You can see the broken mechanical arm in the photo below.

You'll also notice how one piece of the mechanical arm is still in the clutch and the other broken side has fallen out. 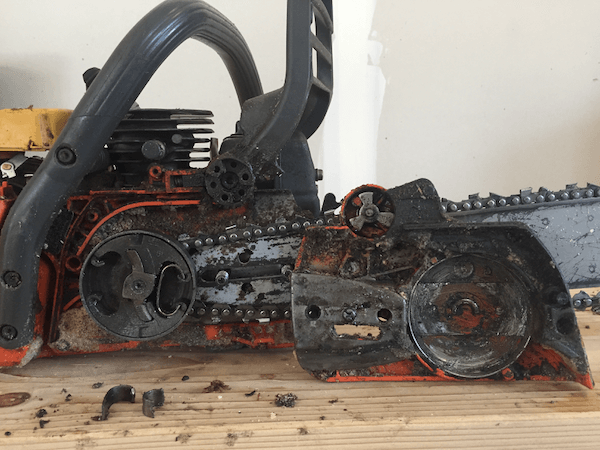 Unfortunately, when the mechanical arm broke it also messed up the clutch cover on the saw.

So, I determined I needed a new clutch cover, new clutch and since I had the saw apart I ordered a new sprocket as well.

I ordered all the parts off of eBay, totaling roughly $30 which was a pretty cheap fix since I was doing the labor myself.

How To Replace A Chainsaw Clutch

To replace a chainsaw clutch, start by removing the top cover of the chainsaw which exposes the spark plug.

You'll also need to remove the clutch cover, the bar and the chain.

The clutch needs to be taken off in a clockwise direction (reversed threads).

If you take a close look at the clutch you'll notice it's stamped with the words "off" and an arrow which states which direction to turn the clutch.

If you just try and turn the clutch clockwise the piston will move up and down freely and you won't be able to put any resistance on the clutch to break it free.

In order to break it free you'll need to bind the piston.

They actually make a special tool for this, but it's just as easy to remove the spark plug and shove some rope into the piston chamber as shown below.

You'll want to shove about 3 inches of rope into the piston chamber. 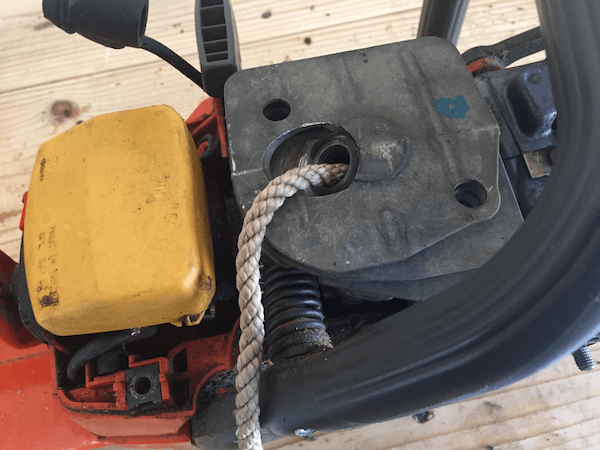 Once the piston is bound, now you can take a screwdriver and a hammer and strike the clutch in a clockwise direction to loosen the clutch.

Once it's loosened, you can just spin it off. 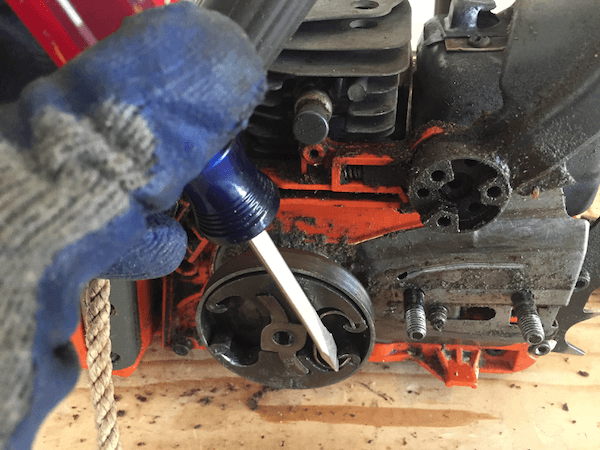 Now that the clutch and sprocket are removed, you can clean up the saw and install the new replacement parts. 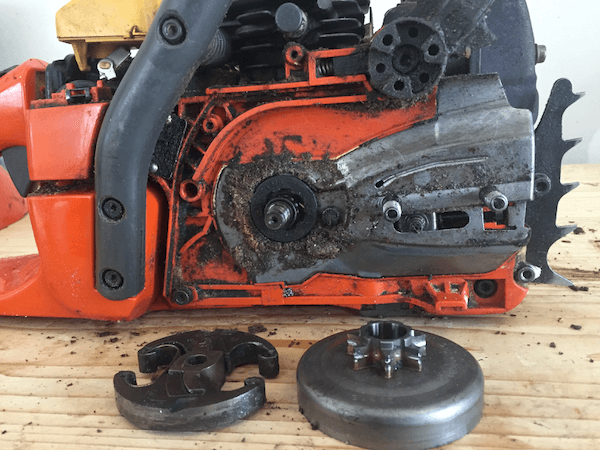 To begin, start by installing the new bearing that will come with your clutch replacement.  I added some grease to the bearing before I put it on.

Installing the bearing is easy, it just slides over the drive shaft. 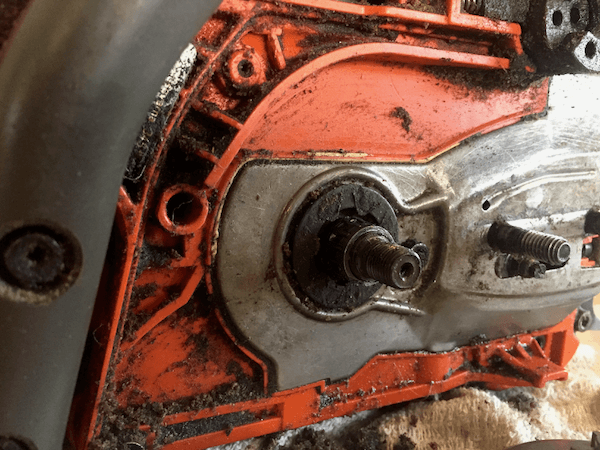 Once the bearing is installed you can slide the sprocket/inner clutch onto the drive shaft. 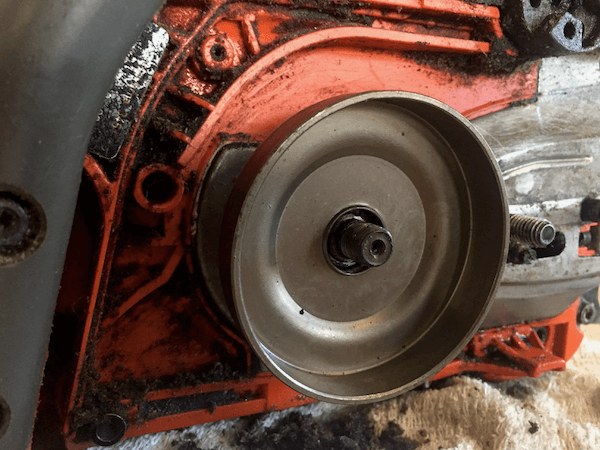 Next, thread the outer part of the clutch back on to the drive shaft in a counterclockwise direction.

You can set the outer part of the clutch with a hammer and screwdriver in the same manner you removed it. 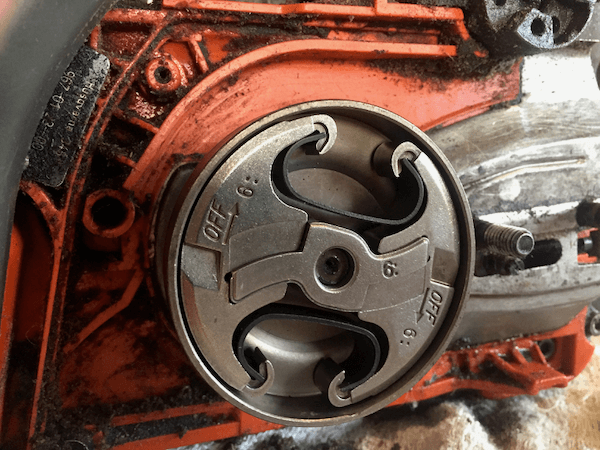 Once the new clutch has been installed, simply re-install the bar, chain and clutch cover and you're done!

How To Replace A Chainsaw Clutch - Overall

Learning how to replace a chainsaw clutch that's broken is a pretty easy task.

Sometimes the clutch itself will not break, but the sprocket will become stripped out and not effectively power the chain.

This can happen from running a chainsaw with a chain that's too tight.

Either way, if you follow these simple steps you should be able to replace a chainsaw clutch and sprocket in about an hour or less without using any specialized tools.