Wondering if larch firewood is a good choice for your wood burning stove, fireplace or fire pit this season?

You’ve come to the right place.

If you’re looking for a new type of firewood to heat your home or build a blazing campfire, you might have a hard time figuring out which species of wood will perform the best for you.

Not all kinds of wood perform equally well, and there are all kinds of differing opinions about various firewood types too.

You’ll want to take into consideration how well a specificities firewood type splits, seasons, burns, and stores.....and if you ask anyone, you’ll probably get a different opinion on which firewood is the best.

That’s not the case with larch though.

In fact, most people agree that larch firewood is some of the best firewood out there.

Can You Use Larch Firewood?

Not only can you use larch as firewood, but it’s highly recommended.

As one of the best types of firewood, larch is a "hard softwood" that is even harder than some genuine hardwood species.

It won’t burn the longest or the hottest, but if you’re cutting wood yourself, you’ll love its other features. 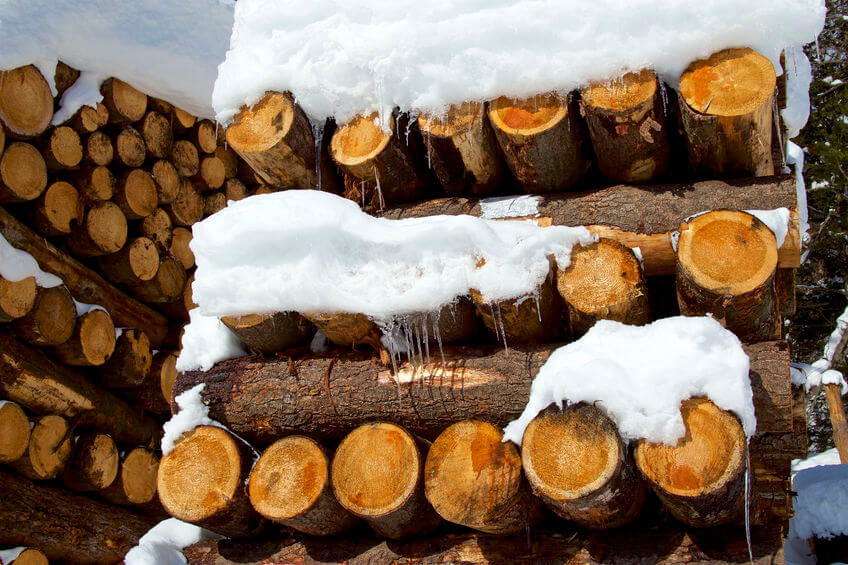 Not only does larch seem to take forever to rot, but it dries quickly and it's easy to cut the logs with a chainsaw.

It’s also easy to split which is a great benefit if you use a splitting axe or maul to split your wood.

Needless to say, if you have larch growing on your property it’s one of the best firewood types you can use.

Is Larch The Same As Tamarack?

Larch is a conifer tree in the Pinaceae family.

It grows up to 160 feet tall and is native to cooler regions of the temperate northern hemisphere, found everywhere from North America to northern Siberia!

This tree requires a cool, somewhat humid climate to grow, so it’s often found in the mountains.

As a pioneer species, it doesn’t require exceptional soil conditions to grow and live for an incredibly long period of time.

All in all, there are eleven species of larch - three of which are native to North America.

Where To Find Larch Firewood

If you’re in the United States, you’ll have a hard time finding larch firewood - but ask for tamarack firewood and you’ll probably have a much easier time.

That’s because larch is more commonly referred to as tamarack here.

There are two major species of larch that grow in North America. Western larch, or Larix occidentalis, grows in places like Montana, Idaho, Washington, Oregon, and western Canada.

The other type, Eastern larch or Larix laricina, grows in the northeast portion of the United States and on into eastern Canada.

In the firewood trade, larch firewood is almost always referred to as tamarack.

Tamarack firewood is used throughout the country, but is the most popular in the interior Pacific Northwest, where hardwoods are tough to come by.

Though a softwood, tamarack (or larch) is the next best thing.

When you are buying or cutting firewood, you’ll want to consider the species, volume, dryness, and of course, the need for splitting.

Larch firewood is known for being very easy to split and stack, particularly when compared to other softwood species.

Since larch splits really easy, it saves not only time......but a lot of hard work on your body.

There's nothing worse than taking a maul or splitting axe to a round of red oak only to be denied on every swing.

After a few minutes you'll be exhausted.

This is one area where larch shines because it will save you a lot of time and energy while splitting, but still give you decent BTUs to last the winter.

Larch firewood also doesn’t rot quite as quickly as other tree species.

While some kinds of larch - particularly Japanese larch trees and those found in Europe - suffer from a rot-inducing disease named Phytophthora ramorum, this isn’t as common in American larches.

As long as larch is dry and not being burned wet, it will not create creosote in a chimney more than any other kind of dry firewood.

If you clean your chimney once a year as you would when burning other kinds of firewood - including maple, oak, ash, or poplar - you should have a minimal amount of creosote and soot to worry about.

Again, seasoning is important - burning wet or green wood (unseasoned wood) of any kind is what causes problems with creosote.

Larch spits and pops excessively when burned....especially if you try to burn in green.

However, as long as it is seasoned, you shouldn’t have to worry about this.

Remember, fresh-cut firewood is up to 60% water (larch is around 50% when green), so you’ll want to give your larch firewood at least six months to season, preferably a year.

Larch is prized for its high BTUs.

It comes in at around 21.8 million BTUs per cord - that’s right.....hotter than many hardwood species!

It burns hot and lasts for quite some time, especially compared to other softwoods.

You can use larch firewood in a wood stove as long as the wood is dry.

It is possible to overheat a stove by overloading it with any kind of softwood, and tamarack is no exception (even though it’s not particularly low-density, like other kinds of softwood).

However, it’s pretty difficult to do this - so as long as you watch your stove, you will be fine. 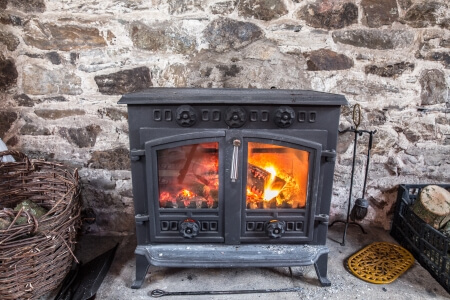 It is worth mentioning, however, that although tamarack burns very hot, it does snap and crackle quite a bit.

It isn’t known for producing excessive amounts of smoke, but its spark production can be a bit concerning.

Its coals burn nice and hot, though.

It also has a strong fragrance - not a bad fragrance, but it does emit an aroma which I've always found to be pleasant.

You won’t have to worry about cleaning your fireplace, stove, or fire pit quite as often if you are burning larch as you would if you were burning other kinds of firewood which is always a bonus.

Larch wood is highly valued for its waterproof qualities and overall durability.

It’s incredibly tough and is, as a result, often used in the construction of boats, exterior cladding for buildings, and even interior paneling.

It is resistant to rot when in contact with the ground, so it’s often used for fence posts too.

However, if you aren’t planning on building anything any time soon, save the larch for your wood splitter.

This kind of wood burns hot and is far less expensive than some of the best firewood types, like ash and oak.

All in all, larch firewood is an excellent choice for your fire pit or wood stove this season.