Firewood weight is determined by two different factors, the density of the wood and the amount of moisture it contains.

Green firewood is wood that has been freshly cut which naturally contains moisture from the tree.

Seasoned firewood is wood that has been cut and allowed to dry, reducing the moisture content of the firewood to around 20 percent or less.

Seasoning firewood can take around 6 months to a year depending on the species.

Oak, a popular firewood choice, can take up to two years to fully season.

Depending on the species, a cord of green firewood will generally weigh 70 to 100 percent more than a cord of seasoned firewood.

The best time to cut firewood is during the winter or in the early spring before the sap starts to run.

Since the winters in Michigan can be pretty severe, spring is my favorite time to cut.

Shortly after the snow melts is a great time to cut firewood because there are no bugs, the ferns and foliage have not grown up making the wood easy to get too, and the outside temperatures are perfect for cutting wood.

Plus if you get your wood cut, split and stacked in the early spring it's generally seasoned enough to burn by winter since it had the entire summer to dry out (depending on the species of wood).

One process of speeding up the seasoning process is referred to as wilting firewood.

If you cut down a tree that is fully leafed out, allow the tree to rest until the leaves become crispy.

This will allow the leaves to draw out as much water as possible from the tree before you process it, reducing the overall moisture content. 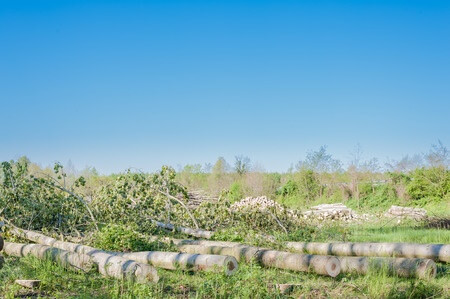 Wilting firewood is a strong tradition for Scandinavians but most argue it's not worth the time or energy to make several trips into the woods to harvest one tree.

Is the time and energy of cutting down the tree, waiting for the leaves to draw out the moisture then returning weeks later to cut it into firewood a good use of your time and energy?

Or is it faster just to cut the wood up on your first trip, split it and stack it and allow it to dry?

In the end it's a matter of personal preference, or something you can do when it's convenient.

For example, sometimes when I have my tractor out I'll cut down 5-6 trees and drag them out into the field knowing I won't have any extra time to cut them up for a couple of weeks.

This is a great time to let the leaves draw moisture from the tree because in a couple of weeks when I have time to cut them up, the moisture content and firewood weight will be reduced.

Take a look at our chart describing various trees which are popular for firewood use.

You'll notice by looking at this chart there's a pretty big difference in firewood weight when you compare certain types of wood.

Splitting the wood after you cut it will expose the interior of the wood to the wind and sun allowing it to dry faster.

Generally, the smaller you split the wood the faster it will season.

However, splitting the wood too small will cause it to burn faster in your wood stove which makes achieving an overnight burn difficult with a bunch of small chunks of firewood.

I like to leave a few larger pieces of wood that are split once in half that I can use to put on the fire at night.

These pieces burn slower, allowing plenty of coals in the firebox the next morning to easily start the fire.

Stack the wood on pallets, blocks or 2x4's and avoid stacking your firewood directly on the ground.

This allows air to circulate under the wood and prevents ground moisture and insects from penetrating your stack of firewood.

Choose a location that receives plenty of summer sun which will speed up the drying process.

Avoid dark, shady areas close to your home which could promote mold growth on your firewood.

A covered firewood shed is a great place to store firewood but if you don't have access to a shed, cover your firewood with a tarp to prevent rain and snow from penetrating the wood. 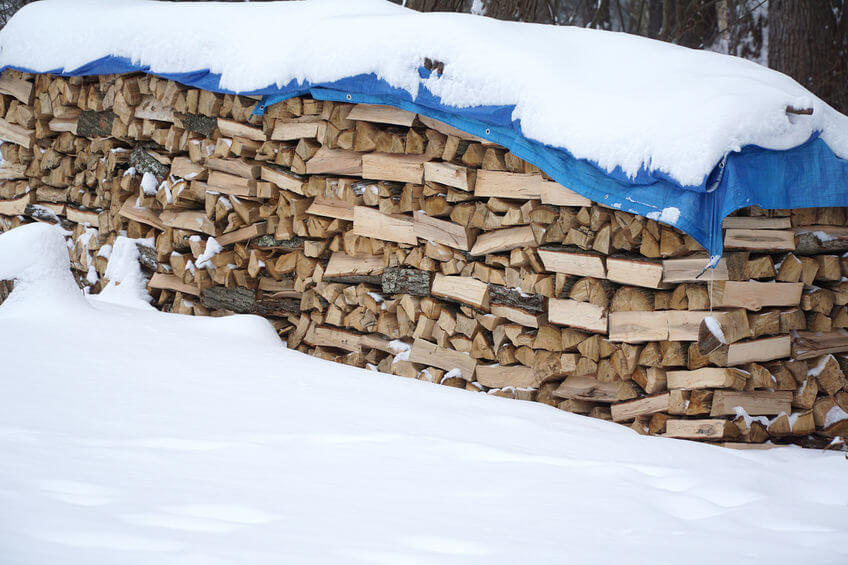 When using a tarp it's important to only cover the top 1/3 of the firewood stack.

For best results, plan ahead.

Cut your firewood early and let the sun and wind dry out the wood before you attempt to burn it.