Chiminea wood can be just about any species of firewood......so what makes this type of firewood so unique? The size.

Firewood made for a chiminea is cut a lot smaller than your typical piece of wood.

Due to the relatively small area inside the base of a chiminea, large pieces of firewood just don't fit.

To accommodate the small opening and base, smaller pieces of wood cut between 9''-12'' inches are used.

These smaller "chunks" of wood easily fit into the fire chamber resulting in a warm, relaxing, enjoyable fire.

If you need firewood for your chiminea you basically have two choices....cut it yourself or buy it.

Cutting firewood for a chiminea is easy, just make sure you cut it to size, split it and allow it to season. 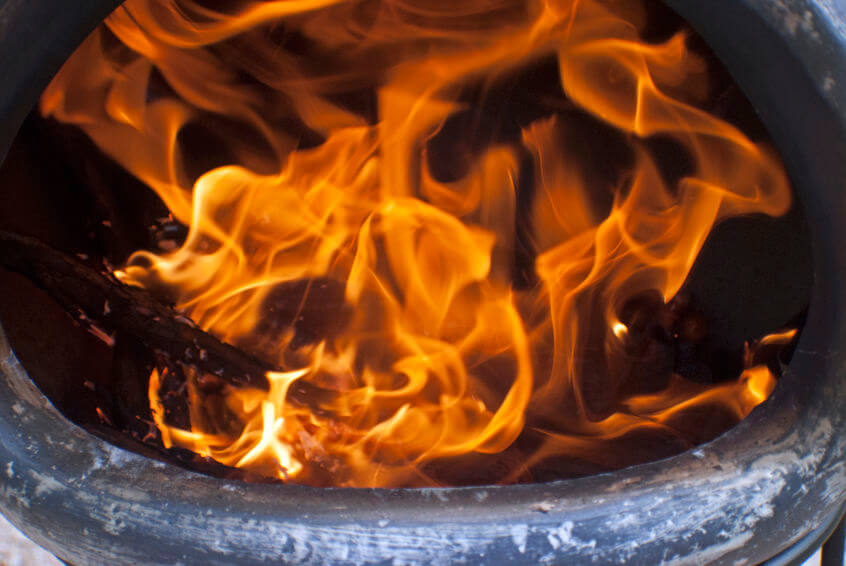 If you don't give your chiminea wood time to season after you cut it, it simply won't burn.

Wet firewood will sizzle and smolder and it won't give you that nice hot flame you're looking for in a chiminea.

You should plan on allowing the firewood to season for 6-12 months before burning it depending on which species you are going to use.

The smaller chunks cut for a chiminea will season a little faster than the longer firewood typically used in a wood stove.

How To Season Wood For Your Chiminea

Seasoning chiminea wood is a lot like any other firewood type, but you will have to accommodate for the smaller length if you're storing the wood in a firewood rack.

You never want to throw the wood into a pile and expect that it will dry out.

The wood will need to be elevated off the ground to allow airflow under the stack.

Also, cover the top 1/3 portion of the chiminea wood with a tarp or other similar object.

You never want to cover the entire stack of wood because you want to leave room for moisture to escape. 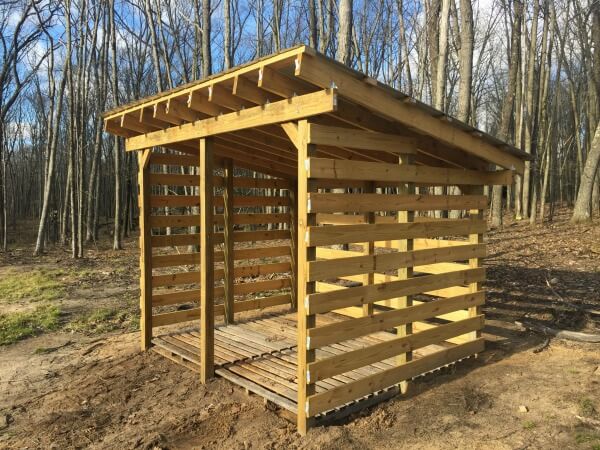 Completely covering the wood will eventually lead to firewood mold, which you don't want to burn in an outdoor setting where you have the potential to inhale the smoke.

Storing firewood in a firewood shed (like the one shown above) is a great way to store and season your firewood.

Since it has a pallet floor, it can easily hold and elevate the smaller wood used in your chiminea.

Plus, if you heat with a wood burning stove, you can just stack your chiminea wood off to one side of the shed, leaving the rest of the firewood shed for longer pieces of wood for your wood stove.

If you choose to buy your firewood, look online or locally.

Sometimes you can find pre-packaged chiminea wood at the big box stores.

No matter which method you choose, burning good quality firewood specifically cut for your chiminea will bring you the most enjoyment.

The type of firewood you choose is up to you.

One of the most desirable species of wood to burn in a chiminea is pinon firewood.

Pinon or pinion wood comes from the pinyon pine which grows in the southwestern United States and Mexico.

The pinyon is a slow growing softwood that typically will only reach a height of 20-30 feet.

Even though it's considered a softwood, since pinyon grows slowly it's actually harder and more dense than a lot of hardwoods. 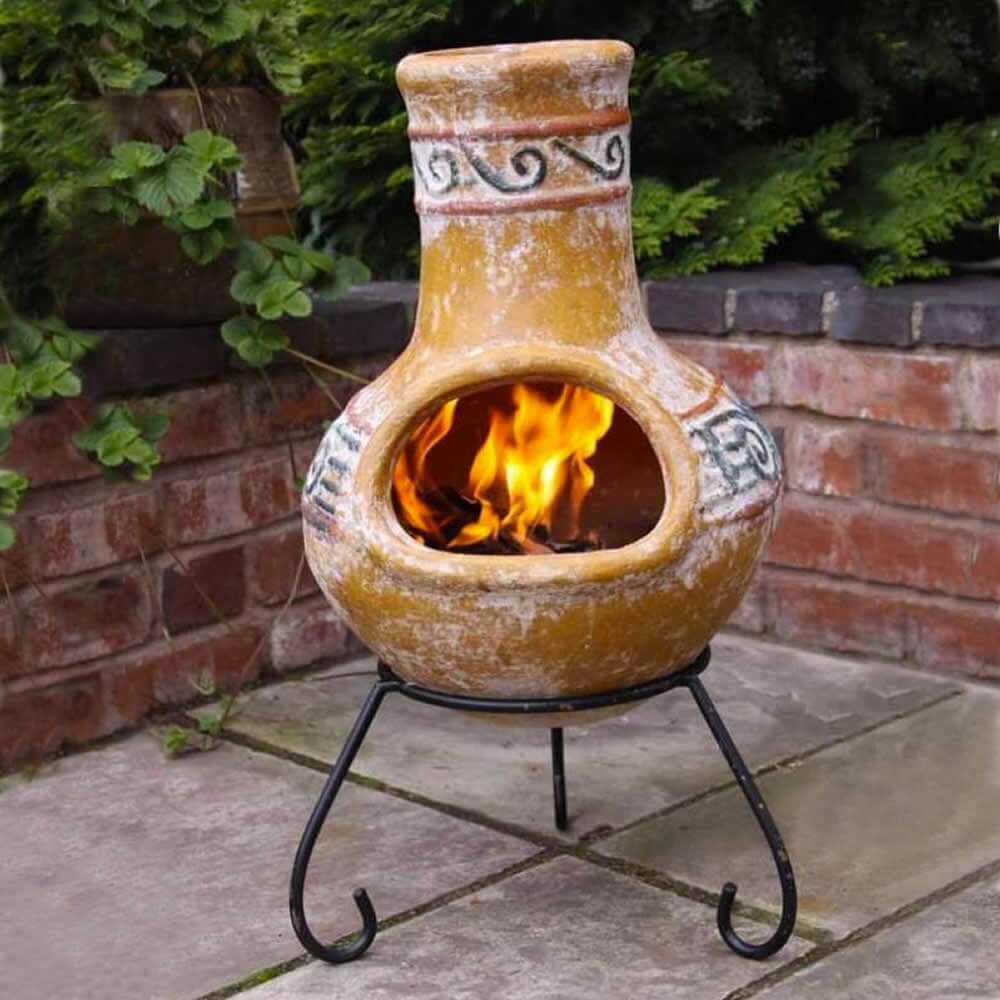 The pinyon also produces a large edible nut which was an important food source for Native Americans and is still widely consumed today.

Pinon firewood is popular for its aroma.

The pine aroma is known to be a mosquito and insect repellant which is why it's such a popular choice in a chiminea. 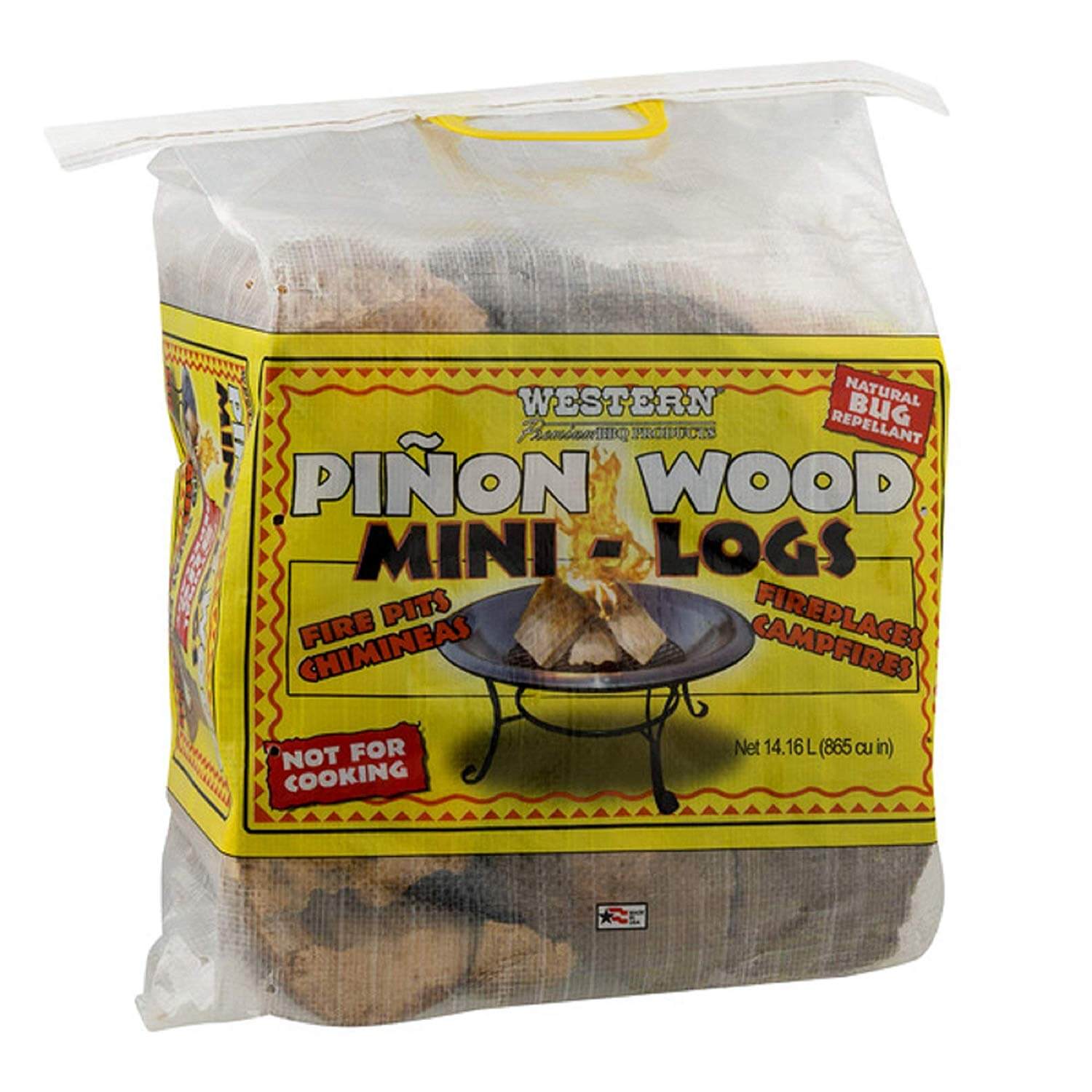 With the added benefit of a natural insect repellent, it's a great firewood choice!

Other popular firewood types used in a chiminea are:

The wood creates a sweet and mild flavoring which goes great with a wide variety of dishes.

Since a lot of chimineas can easily be converted into a grill by taking off the stack, apple is a great choice because you'll not only get to enjoy the sweet smell of the wood, but your food will also benefit from it!

Hickory firewood is very dense and it isn't very easy to split, but it creates a hot, long lasting fire.

Since it's so dense, you'll need to give hickory at least one year to season if you're processing the wood yourself, and you'll also want to use a decent amount of kindling when starting the fire because it can be difficult at times to get hickory to light. 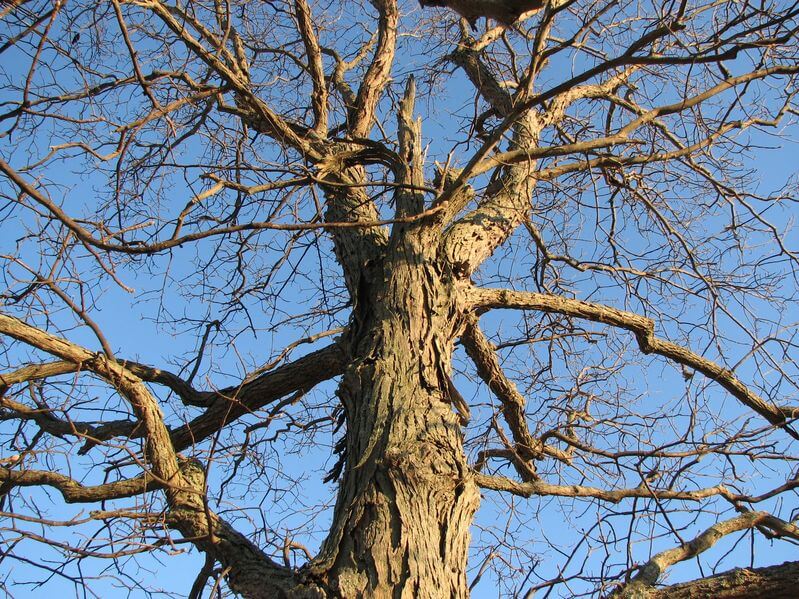 Hickory can take on a bitter flavor if you use it to cook with, so it's not the best choice for meals when compared to other woods like apple or mesquite, but it's amazing for a nice, hot, long lasting fire.

Do you have to burn one of these special firewood types in your chiminea?

No, you can choose just about any typical firewood you want.

However, sometimes it's nice to burn a wood that not only looks nice, but smells nice too.

No matter what species of chiminea wood you choose, just make sure the wood is seasoned to ensure a good quality fire.

Once you have a good fire started, the only thing left to do is sit back and relax!