Is chestnut firewood a good choice to burn in your wood stove or fireplace?

Or....if you like to cook with wood or smoke your food, perhaps you're considering chestnut to get the job done?

Unfortunately, there’s no short answer to this question.

Since there are so many different types of chestnut that you could potentially choose from, each of which has different properties and applications, it's often not an easy decision to make.

However, these types of chestnut are frequently used as firewood.

In this article, we will tell you everything you need to know (both the good and the bad!) about using these various types of chestnut for firewood.

Which Types Of Chestnut Are Good For Firewood?

American chestnuts aren’t common in most places, but if you are lucky enough to have some growing on your property, you'll find that they make decent firewood.

The flames will be small, but they’ll be strong and have good heating value. 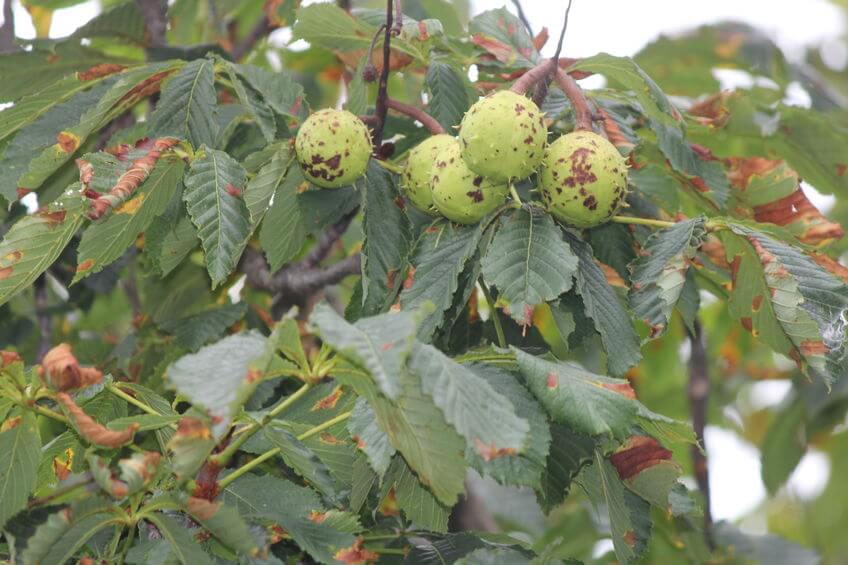 Chestnuts are easy to split and start and while a fire built out of chestnut firewood will likely produce a lot of sparks, you’ll find that the sweet, lingering fragrance more than makes up for this mild inconvenience.

One other detail to note - in some places, American chestnut is a protected endangered species.

You’ll want to be careful about chopping it down if that applies to your location.

In many places, American chestnut has all but been completely destroyed by the blight, so if you think you have American chestnut on your property that you’d like to use as firewood, make sure that you have positively identified it before burning it.

It could easily be another type of chestnut that won’t produce the same results for you.

It is only found in a few places in the United States, with a native range from Maryland down to Kentucky and west Texas.

It is small, only growing to about seven feet tall at most.

As a result, it’s not a common firewood species - it’s just too much of an annoyance to bother cutting it down.

It’s prized more for its nut production and ornamental value than anything else. Skip this one if you’re looking for decent firewood.

You can burn Chinese chestnut for firewood, but lots of people report that it gives off an odor of rotting meat when burned.

It can be a bit of a pain to cut and stack too, but it has average heating value that will make it work in a pinch.

As mentioned earlier, a horse chestnut is not a true chestnut tree.

It’s a hardwood specimen that tends to spit a lot and doesn’t split well.

Furthermore, lots of people report that horse chestnut gives off an unpleasant odor when burned - an odor not unlike that of manure.

If you absolutely must burn horse chestnut firewood, don’t burn it indoors - you’ll likely find yourself smoked out of your own home.

Also known as the Spanish chestnut or European chestnut,  sweet chestnut is one of the most common firewood types in southeast England and other parts of Europe.

In England, oversold (or neglected) chestnuts have very little value in the timber market. Therefore, it is often used as firewood.

It is not the best kind of chestnut you can use for firewood, but if you have a bit of patience, it can be a suitable choice.

You will want to give it about two full years to allow it to season if you have cut, split, and stacked it.

If you don’t wait a full two years to dry it, you may find that it doesn’t burn quite as well.

If you use sweet chestnut, only use it in a wood stove with a door.

Don’t use it in an open fireplace, as it will send a lot of sparks flying.

Otherwise, it’s a good choice as it is easy to fell, split, and cut. Again, just make sure you give it plenty of time to season.

If you don’t absolutely have to burn it, don’t - sweet chestnut actually has more value when used for things like furniture building, cabinetry, and wood carving.

You may be better off saving this wood and using some other kind of wood in your fireplace.

Unfortunately, it can be tough to tell the many types of chestnut trees apart.

The best way to figure out what kind of chestnut you have is to consider your location.

Certain types of chestnut trees are common only in certain areas as mentioned in the descriptions above.

American chestnut is the rarest chestnut tree but can be identified by its leaves, which have large, sharp, and hooked teeth.

The underside of the leaves will be covered with many small dots and the twigs will be slender, smooth, and hairless.

They will be almost a reddish-brown in color, while the twigs from sweet chestnut are dark brown and those from horse chestnut are a pale brown (though they can also have a red tinge to them, too).

If you’re not sure what kind of chestnut trees you have, you may want to consider bringing a leaf or twig sample to your local forest service office or cooperative extension.

They will be able to give you an idea of the plant you are dealing with.

Keep in mind too, that all chestnuts can cross-pollinate - so you may have more trouble trying to identify a tree because it’s actually a hybrid.

That said, keep these tips for using chestnut firewood in mind.

Stay away from horse chestnut firewood!

Although they are rare, American chestnuts are by far the best chestnut firewood species you can use.